We are pleased to announce that our 499 & 500 services from Airedale/Ferry Fryston to Castleford will resume operation from Monday 7th September 2020. Sorry for any inconvenience caused over the past few months. 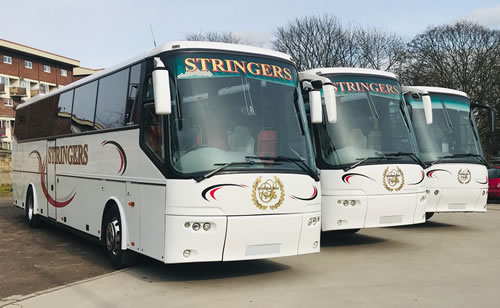 Stringers Pontefract Motorways is a well established local family business which was founded in Newgate Pontefract by Mr Sydney Stringer in 1946. Initially as a Taxi operation, later acquiring a fleet of vans for the collection and delivery of mail, newspapers and school meals.

In 1953 a coach was added to the business establishing Stringers as the first and longest running coach operator in Pontefract. Moving to the present site in Southgate in 1955 led to the expansion of the business with the building of a Commercial Garage and Filling Station in 1963. In 1992 the premises were substantially modernised and upgraded with the addition of purpose built offices, a new service station complete with shop, and car and jet wash facilities. In 2001 maintenance facilities were improved with the addition of a new MOT Testing Station.